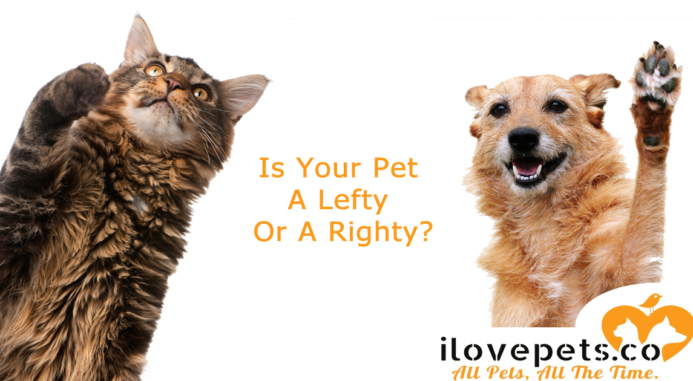 Approximately ten percent of people are left-handed. Left-handedness has been associated with greater creativity, intelligence, and a shorter temper, though research has shown that the preference does not seem to have an effect on personality.

Is Your Pet Left-Pawed Or Right-Pawed?

Pets can also be right-handed or left-handed. It’s easy to tell if your pet prefers to use their right paw or their left. Simply take note of which paw your pet offers when you ask them to “shake” or “high five.” You can also observe which paw they use first to descend the stairs, and which paw they use when trying to grab food out of a container with a small opening. Watch for consistent signs that your pet favors one paw over the other.

It’s important to use multiple tests over a long period of time before you can determine if your pet is a southpaw. Unlike humans who rely on their hands for writing, picking up objects and many everyday tasks, pets do not rely on the dexterity of their front paws as much, so their preference will be less apparent. Some pets do not seem to have any preference at all.

Fortunately, you’ll never have to worry about getting left-handed scissors or musical instruments for your left-pawed dog or cat. Even so, there’s some interesting research on the complementary characteristics of pets that prefer to use their left paw.

A small study found that left-pawed dogs were reported by their owners to be more wary of strangers, though none of the dogs in the study were found to be notably aggressive. Since this was a limited study, more research is needed to come to a conclusion. Overall, there’s not a strong connection between personality and paw preference, so an animal’s right or left pawed-ness should not affect your decision to adopt them.

Human males are more likely than females to be left-handed, and the same is true for cats and dogs.

Caring For Your Left-Pawed Pet

Although there is evidence of personality differences in pets that prefer their left paw, the difference is not significant. Regardless of which paw your pet prefers to use, if they are fearful and wary of strangers, you may want to work on counter-conditioning and socialization to help them learn to relax.

Some pets will be fearful for their entire lives, no matter how much you socialize them. It’s vitally important that you do not force them into uncomfortable situations, which only reinforces their fears. Instead, do your best to accommodate your pet’s unique personality to give them a stress-free life. Even pets that do not like visiting schools and going to dog parks can be wonderful pets, best suited to spend time with their favorite people than to socialize with other humans and animals.

So are your pets left-pawed or right-pawed or ambidextrous? Share with us some of the distinct behaviors they exhibit?