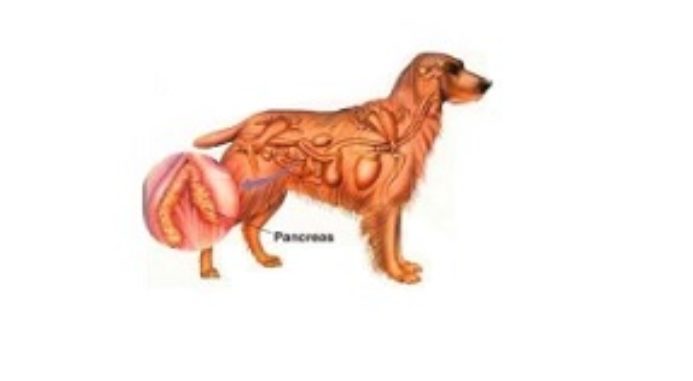 The inflammation of the pancreas is known as pancreatitis. Pancreatitis in dogs can be life threatening if it gets severe.

Pancreatitis in dogs can happen suddenly (acute) or over a period of time (chronic).

Both could be life threatening as the digestive enzymes can leak out of the pancreas during this time.

Pancreas is a glandular organ situated between the stomach and first part of the small intestine (duodenum). It is an integral part of the endocrine and digestive system.

What happens when the enzymes leaks out?

When the inflammation of the pancreas occurs, the flow of enzymes into the digestive tract can be disrupted.

This will force the enzymes out of the pancreas into the stomach and the intestinal area.

If the digestive enzymes ever leaks out, it will start digesting the fat, proteins – basically anything on its path, even the pancreas itself and the surrounding organs.

If pancreatitis gets severe, due to the vicinity to the pancreas, vital organs like the kidney and liver can also be affected.

Organ damages due to pancreatitis can be permanent and irreversible.

Cause of pancreatitis in dogs:

All the causes that results in the pancreatitis in dogs are not yet found. However, there are certainly some factors seen in dogs which have pancreatitis.

Obesity, diabetes and internal infections are some diseases that can lead to pancreatitis.

Nutritional factors like lipemia (high fat level in blood) and hypercalcemia (high calcium level in bood) may also cause pancreatitis.

Toxins or drugs, even antibiotics, zinc and calcium supplements, insecticides and pesticides can also lead to pancreatitis.

Viral and bacterial infection as well as metabolic disorders, trauma etc. could also be the factor.

There are also reports of pancreatitis in dogs after being bitten by scorpions. This is because scorpion venom can react to the pancreas leading to inflammation.

Breeds like Cocker Spaniel, Miniature Schnauzers and Miniature Poodle are more vulnerable because genetically they have high fat content in their blood.

Also the females and older dogs tend to get it more than the males and younger dogs.

If your dog had recent abdominal surgery then the chances of getting pancreatitis is pretty high as well.

Signs of pancreatitis in dogs may vary depending on the breed of dogs.

Symptoms include upset stomach, abdominal pain which gets more severe after eating, greasy poop, signs of tensed and arched back.

There are other varieties of symptoms that may be seen which includes:

If bleeding occurs in the pancreas, shock may occur leading to collapse and even death very quickly.

Pancreatitis in dogs is diagnosed by a physical exam and blood tests. Veterinarian is also going to check for the occurrence of gallstones and a disorder called reflux.

Specially designed blood test like the cPLI (canine pancreatic lipase immunoreactivity) is done to check the level of pancreatic enzymes, amylase and lipase, and rule out other diseases.

Increase in level of white blood cell and liver associated enzymes may also occur during pancreatitis.

Since insulin producing cells can be damaged due to the inflammation of pancreas, normal level of insulin is also measured.

Deficiency of insulin may also lead to diabetes in dogs. So, tests for diabetes may also be done.

X-rays may also be done to see if pancreatitis is the problem or the symptoms are from any foreign body or gastrointestinal disease.

Ultrasound along with needle biopsy may also be done in some cases to search for cysts, abscesses or tissue growth.

Pancreatitis progresses quickly in dogs but this can be treated without any permanent damage to the organ.

If left untreated however, it may lead to severe organ damage, and even brain damage is inevitable.

So you have to take the dog to the vet where support, nutrition and help with the pain are going to be provided.

During this healing process, dog must be on fluid and nutritional support where the acid, base and electrolyte balance may need to be constantly monitored. No food and water should be given by mouth for up to a week.

After the dog gets better high fiber, low fat diet must be fed in order to maintain the pancreatic health.

Both acute and chronic pancreatitis can be life threatening. And pancreatitis in dogs is likely to reoccur if proper care is not taken.

Recognizing the signs and undergoing immediate treatment is the best way to deal with pancreatitis in dogs.

If you want to share an experience or expertise regarding pancreatitis in dogs, you are very welcome to do so in the comment section below.