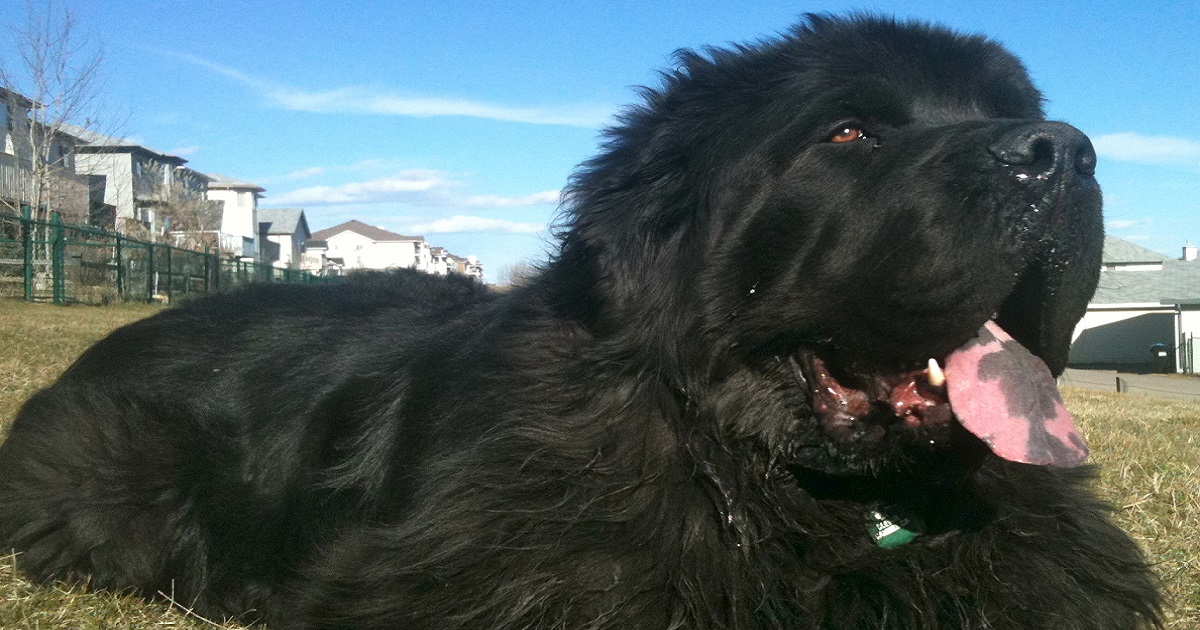 The history of this breed is not clear; as the origin is not fully known but several theories have been popularized.

It is believed the breed either originates in the Pyrenean Mountain Dog brought by the French fisherman or the origin of the breed is much older, and their ancestors are the dogs brought by the Vikings in their boats.

Also called Terranova the breed is originated in Canada, to be more exact on the Terranova Island. On the island the dog was used for its swimming abilities and its strength. The breed was and still is used as a work dog and lifesaver.

Its calm temper and loyalty recommended it for a family dog. its legendary tolerance, qualifies the breed as children friendly.

Small children shouldn’t be left unattended with the dog though as they can be accidentally pushed or hurt due to the dog’s size.

As a work dog it has an equilibrated personality, courageous, intelligent and strong. Despite its massive look, the Newfoundland is an incredibly agile dog, being used as a herd dog.

The body can be fitted in to a rectangle; the thick coat is adapted to the cold climate of Canada. The color can be copper, black or spotted black and white also called “Landseer”; you shouldn’t confuse it with the breed with the same name.

It is a low maintenance breed, but its coat must be brushed every week or every two weeks and washed from time to time. The skin has a high sebum production is a breed adaptation to the swimming behavior of these dogs; as the oily secretion waterproofs their coat.

If it is not washed on a regular basis, the hair will clump together because of the oily skin production, promoting skin diseases.

It is advised to start training them from puppyhood, teaching it not to jump on people should be one of the first training lessons, considering its adult size.

The Newfoundland is a water loving dog, but if you can’t provide a big enough water source for it to swim in, it will quickly adapt to the live on the land.

Before you get a Newfoundland you must keep in mind that as an adult it will weigh about 50 to 60 kg, making it not a suitable apartment dog. If you are however living in a place with hot summers, you can choose to trim the coat for summer.

The breed is notorious about the hip dysplasia, as a puppy it has about 50% chances to have hip dysplasia. Although in a smaller proportion, elbow dysplasia is also popular with the Newfoundland.

Both diseases are genetic diseases; unfortunately the weight of the dog will not allow a dog to live with any of these diseases. On the bright side there are several surgical options to solve the problem.

Each of the previously mentioned disorders can be prevented or the incidence can be lowered by genetically testing the parents before breeding.

A dog that carries the gene for any of this disease is not affected by the disease but puppies from parents carrying the disease have it in a high proportion. Before buying a puppy, ask the breeder if the parents have been genetically tested for the diseases.

Less common but still present are the atopic dermatitis and eye related problems.

An atopic dog will be predisposed to dermatitis and otitis, your dog will be uncomfortable; permanently licking or scratching itself.

The eye problems refer to a defect in closing the eyelids, as the eyelid skin flap is too long and the lower eyelid is hanging to the exterior giving your dog a sad look. This disease is called ectropion; it can be surgically corrected, but only after the age of one year is reached. During this time ointments and eye drops will be prescribed to prevent the complications due to this disorder.