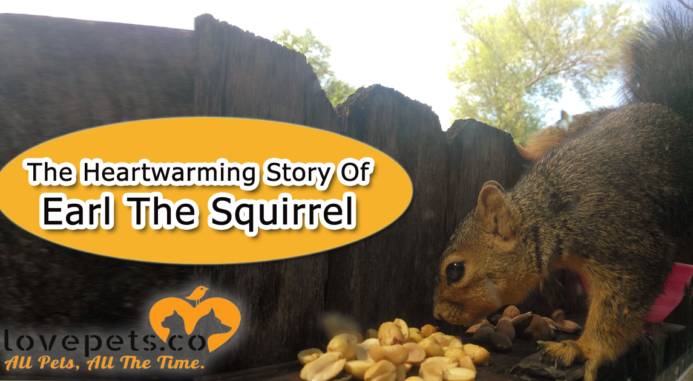 Sometimes, you just find yourself in the right place at the right time.

When a baby Earl, the Squirrel, fell out of a tree with a squeak, his chances of surviving were incredibly slim.

Eyes still sealed and just barely dusted with a thin coat of fur, it wasn’t long before ants began to swarm over him, ready to make a fast meal of his tiny body.

Luckily, a little boy found him, put him in a shoebox and gave him a name. His family passed him off to their friend, Kim, knowing that she loved animals and would give Earl the best chance of survival.

Kim took Earl home and began to take care of him right away.

She created a nutritious, calorie-rich formula using infant cereal, applesauce, and baby formula. The watery mixture came out in manageable drops through a child’s medicine syringe fitted with rubber tubing. Every 2-4 hours, Earl filled his tiny belly with the nourishing formula.

After mealtimes, Kim massaged Earl’s belly and genital area with a warm rag to imitate the sensation of his mother licking him to encourage him to relieve himself.

In three days, Earl opened his eyes for the first time. The first thing he saw was his adoptive mom, who took care of him around the clock.

In a few short weeks, Earl made himself a part of the family. He raced around the house, darting around the couch, weaving under a chair, clambering up the windowsill, and back, “like a marathon,” Kim says. He even played with toys, stalking and “attacking” them as a cat would. 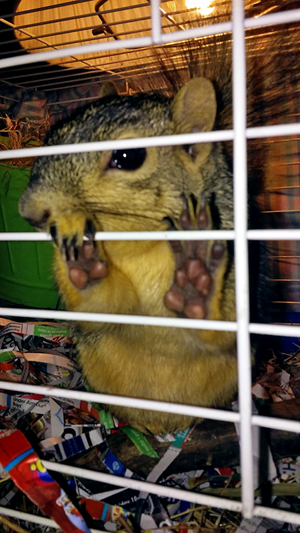 Earl even had a feline sibling who loved to chase him, but Earl wasn’t scared – he chased that cat right back.

Earl ran around, explored, and Kim took him everywhere – shopping and to visit friends – but no matter what, he wouldn’t go far. Earl would always return to her and climb up her leg for a snuggle.

He began to eat solid foods like nuts, carrots, bananas, and oranges. Once, Kim offered him a bite of a burger, but he wouldn’t take it – he’s a strict health nut!

As Earl got bigger and grew a warm coat of fur, Kim began to let him spend time outside so he could get fresh air in the safety of his cage, and then brought him inside at night when the air grew chilly.

When he was about 8 months old, Earl began to escape the cage and go on adventures for a week or two, and then he would return home. 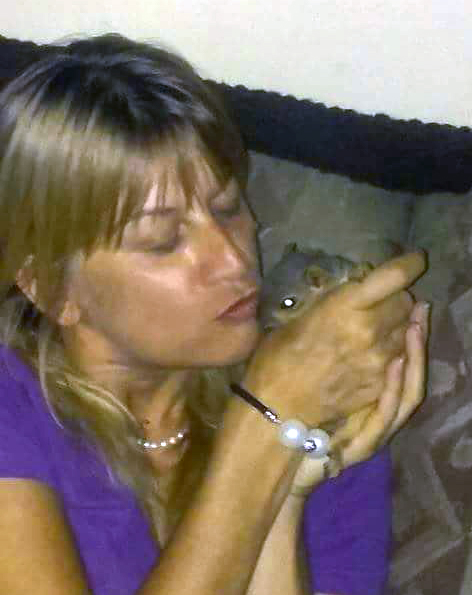 Kim was a worrying mother. She worried that Earl would get into fights, hit by a car, or roam too far from home.

But it was clear to her that he was still very much a wild animal, and he was ready to start his life on his own.

Now, Earl spends all of his time climbing trees, gnawing bark to wear down his ever-growing front teeth, and more than likely has a few litters of his own with local female squirrels.

At three years old, Earl always stops by to visit his “mom” to let her know that he’s safe – and to get his daily snack of pecans!

Kim’s advice to anyone who finds a tiny animal in need of help – “just pick it up and give it a chance. You never know what could happen!”

Squirrels do not make good pets. However, if you have to rescue and raise one because you don’t have any other alternatives, read our post on The Ultimate Guide To Squirrels As Pets.

Have you ever rescued an animal?