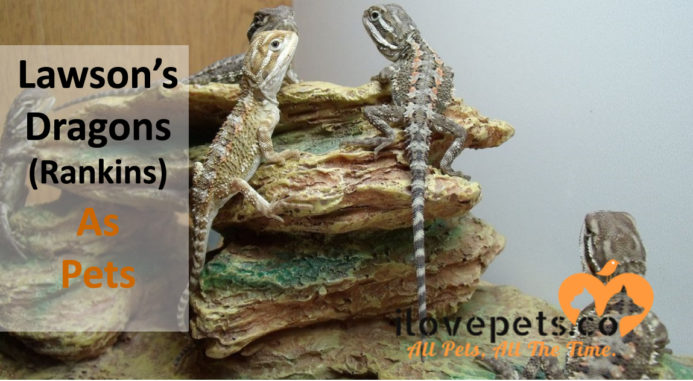 Lawson’s Dragons are also known as Rankin’s Dragons. They are small reptiles that live up to around 8 years and can be handled by humans regularly. They are sometimes considered a smaller version of a Bearded Dragon, and are fairly closely related.

They came from Australia, but are fairly often kept as pets nowadays. They come in a variety of colors, but are most often gray or tan because it allowed them to blend into their surroundings better. Their backs are hard and scaly, and their tummies are soft. The average size is between ten and thirteen inches long for adults. These lizards thrive in hot, dry environments, and will require heat lamps and other special props when kept as a pet.

These small reptiles are easy to handle because of their calm nature. They tend to be tolerant and even trusting of humans, as long as they are handled gently. They are laid back and usually don’t bite unless provoked. These animals are safe to be kept as pets for children, as long as the children can remain calm while holding them and not poke and prod at them.

In the wild, these lizards are very social. They communicate frequently, usually with body language such as bobbing their heads and curling their tails. Males are slightly larger than females. It is often recommended that beginner owners get young adults rather than babies or older lizards.

It is a good idea to have more than one lizard in the habitat to ensure that they get enough social interaction, as long as you are confident in your abilities to care for a pair. This is most commonly done with male-female pairs; two males in the same habitat are likely to become aggressive and fight, so this is not recommended.

If you choose to keep more than one Lawson’s Dragon, make sure the two are full grown and of equal size. If one is smaller, it may not be able to get as much food as the bigger one. It is also recommended that you regularly let your pets out of their habitat to explore the outside world, handling them and letting them crawl on you.

What Do They Eat?

Lawson’s Dragons are omnivorous, and there are many things that they can eat. Like many species, the younger ones will eat more meat, while the adults will eat more plants. These lizards are hunters in nature, and like to go find their own food.

They like ground-level vegetation, and also eat worms and insects. When kept as pets, they need to be fed protein and greens daily. This can include crickets, locusts, mealworms, collard greens, dandelions, kale, etc. They need to have fresh water available at all times, such as in a bowl.

What Kind of Habitat Do They Need?

These small reptiles require a vivarium with warm, dry, and rocky conditions. They need a decent sized enclosure of a least a few feet cubed in dimensions, but the bigger the better. They require heat lamps on one side of the habitat, and these lamps should be set to around 105 degrees Fahrenheit.

Make sure the heat lamps only warm up part of the habitat to this temperature, and that the other side of the enclosure is at room temperature. This will give your pets the option to move towards or away from the heat sources as needed. Sometimes, they like to sleep where it’s cooler, and stay on the warm side during the day. These animals will survive at 70 degrees but need to have the ability to raise their temperature to upwards of 100 degrees as needed (up to 110 degrees).

Heat rocks are not safe for these animals, because it can burn their soft bellies. Stick to heat lamps and other methods that the dragons are not able to directly touch. Lawson’s Dragons need UVB and UVA lights for their habitat.

These lights contain vitamins and simulate the dragon’s natural conditions under the sun. Remember that windows often block UVB light, so do not put your pet’s UVB light source on the other side of glass unless you’re sure it will allow the light through. Always have a sufficiently sized bowl of water in the habitat for your lizards to drink from and bathe in. They like to have decorations in their vivarium, so use trial and error to figure out what kinds of props your pet(s) prefer most.