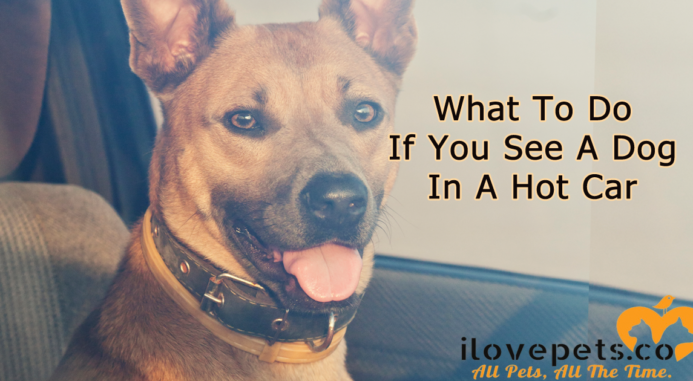 Isn’t it wonderful to be able to take your dog with you when you go out, instead of leaving them at home?

Most dogs love car rides, especially if they know they’re going to the park or the dog beach.

However, taking your dog with you can be inconvenient. They’re not allowed in most public places. People sometimes resort to leaving their dog in their car while they run into the store “for five minutes.”

Even if you run in, grab what you need, and don’t have to wait in line, it only takes a few minutes for the inside of your car to heat up like an oven.

Is It Ever Safe To Leave Your Dog Alone In A Car?

If your car is a newer model, you could leave your dog inside with the engine running so the air conditioner stays on. However, this can give you a false peace of mind.

If your dog is not restrained, they can inadvertently push buttons – shutting off the AC or opening the windows. Your car could also get broken into, and someone may steal your dog.

Many businesses will allow you to bring your dog inside if they do not sell cooked or unpackaged food. You can always pop in and ask if it’s okay – the worst they can say is no.

When you need to go somewhere without your dog, leave your dog at home.

What Does The Law Say?

That means, if you break into a car to rescue a dog, you could be arrested. Even so, it’s likely that the charges will be dropped, as in the case of a Georgia man who broke into a car to save a Pomeranian in 2015.

*Laws are subject to change. If your state does not have sufficient laws to protect the lives of pets, write a letter to your local legislators.

First: Take pictures of the dog, the vehicle, license plates, and, if possible, record the outside temperature by taking a photo of a thermometer, or at least screenshotting the current weather report on your phone.

If the dog is left with the air conditioning on, or it’s under 70 degrees Fahrenheit, and the dog does not seem to be in any distress, you do not need to intervene. Though it’s not the safest thing for their owner to do, it’s not illegal to leave a dog in a car unless they are in immediate danger.

Second: Call 911. Even if the owner of the vehicle shows up, it’s important that they are held responsible for leaving their dog in their car. This is why we suggest calling the police, then looking for the owner. At this point, you have no way of knowing when the owner will show up, so it’s best to have the police on their way.

Third: Run into nearby businesses and ask to have the owner of the vehicle paged.

If you follow these steps, the dog will probably be rescued in 5 to 10 minutes. But what if the dog is already unconscious, or looks to be in severe distress?

You might decide to break the window and rescue the dog yourself. Remember, this is illegal, and you could be arrested and charged for breaking and entering. Call the police before you do this.

Breaking into the car should be your absolute last resort. We don’t advise you to do something illegal. But if you decide to do it, at least make sure you take photos for evidence and call the police to make it clear that you have the best intentions to help your case if you get arrested.