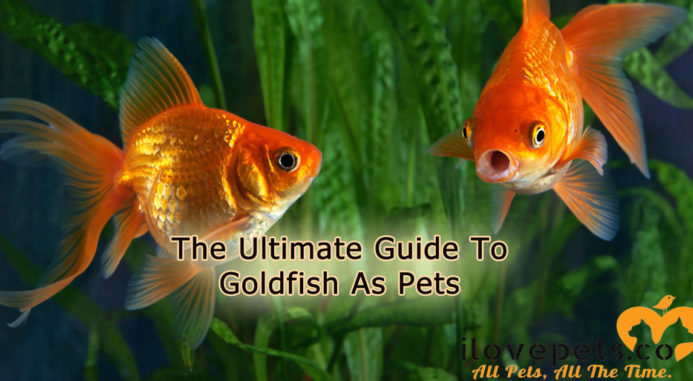 With their shimmery scales, big eyes and pouting mouth, the goldfish is arguable the cutest fish ever.

Though they’re easy to love, most die prematurely because they do not typically get the care they need to see out their maximum lifespan of 15 years.

Goldfish are still a great beginner’s pet, as long as the responsibility is taken seriously. Though you may acquire your goldfish for cheap or even for free, you should still be prepared to invest a bit of time and money into their care.

Fortunately, the biggest costs are upfront, meaning if you get fish tank setup right the first time, you’ll only have to spend a few bucks per month to keep your goldfish happy.

What Exactly Is A Pet Goldfish?

A goldfish is in the carp family, originating from East Asia.

However, they have been selectively bred and domesticated, so they are no longer found in the wild, and it would not be humane to release your fish into a body of water.

The above are just a few of the many varieties of goldfish available. They can come in orange, yellow, white, black, and more colors, with any combination of markings.

Where’s The Best Place To Buy A Goldfish?

You’ve probably seen goldfish available for very cheap at fairs or offered as prizes at county fairs. While these are not the most well-bred fish, they are hardy and can make perfect starter fish if you’re not ready to make a larger investment. In fact, the longest-living pet goldfish was a funfair prize goldfish named Tish, who lived to be 43 years old.

Your local pet store likely carries a few varieties of fancy goldfish. Though the average pet store does not have the resources to give each fish sufficient tank space, the average goldfish will be able to live in crowded conditions for a short period of time, and will perk up once you bring them home.

An aquatic breeder may sell exotic, hard-to-find varieties. Since raising and breeding fish is more than a hobby to them, they’ll be able to give you ongoing guidance for keeping your fish healthy.

Online fish breeders can ship goldfish worldwide using expedited shipping. They may have live-on-arrival guarantees, as it’s not uncommon for some fish to die in transit.

Even so, goldfish are hardy, and when properly packed, should arrive safely. Look for reviews for the seller before you purchase, and only pay with PayPal or a credit card that offer fraud protection, do not pay via wire transfer.

What Kind Of Tank Does A Goldfish Need?

The biggest reason goldfish die by the time they’re three years old, rather than their expected lifespan of 10-15 years, is because their tank is too small.

Like all living beings, goldfish produce wastes. Their wastes cause harmful ammonia and nitrates to build up in the water. Over time, if the tank is not kept clean, the fish will literally be poisoned by its own wastes.

In a large tank, it takes a long time for wastes to build up. Add a filter and regular water changes, and your goldfish can live happily for years.

For a small goldfish, you’ll need a tank that holds at least 10 gallons. It will need to be upgraded as your fish grows.

For a larger goldfish, expect to get a tank of at least 30 gallons for one fish.

Use a filter that is large enough for your tank. Change the filter cartridge every three months or as indicated on the package.

If your tank is on the small side, use a filter and change the water more frequently.

Your goldfish tank needs to have beneficial bacteria to help balance the ammonia levels in the water.

Straight tap water contains chlorine that kills off beneficial bacteria. De-chlorinator, found in any pet supply store, should be used at least 24 hours in advance of tank setup or water changes.

Before adding your fish, you will need to build up the beneficial bacteria to create a balanced environment that keeps ammonia overgrowth under control. A product like Dr. Tim’s One And Only Nitrifying Bacteria for Freshwater can be added to the water right before you introduce your fish.

Depending on the size of your tank, you will need to do partial water changes (removing and replacing 25% of the water) between 1-3 times per week, and complete water changes every 1-2 months.

Never use soap to clean your tank – plain water is fine.

A bucket, a siphon hose, a gravel vacuum and a tank brush will help make these tasks much, much easier.

What’s The Best Diet For A Goldfish?

Goldfish are opportunistic feeders. This means they do not get “full,” and will eat any food that is in front of them.

If overfed, it will wreak havoc on their digestive system. They may become constipated, or they may produce so much waste that it over-pollutes the tank. Goldfish can also become overweight and may have trouble swimming.

Use a high quality goldfish food as a complete diet. You can supplement their diet with skinned, blanched peas and freeze-dried bloodworms.

Your goldfish will eat any edible plants in their tank. It’s better to use silk or plastic plants to ensure their hiding spots do not disappear.

Do You Keep Goldfish As Pets? Share Your Experience Here So It Can Help Other Goldfish Enthusiasts.