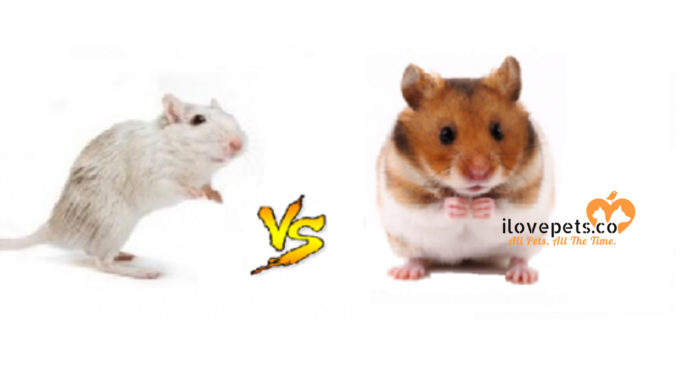 Hamsters and Gerbils are similar in many ways, yet they are so very different. Even though they are both mammals and are very popular as pets, they are completely different species.

At first glance, you might think they both look the same. Yeah, they are both adorable and make good pets but that is where all the major similarities end.

In order to decide which furry rodent is a perfect match for you, you have to totally understand the differences between them.

Understanding these differences beforehand is greatly going to help you make decision about the best individual choice so you don’t have a slightest regret later on down the road.

Here, we are going to look at both physical and behavioral differences between hamsters and gerbils. If you want to read the summary of the differences side by side, don’t forget to check out the infographic – The Major Differences Between Gerbils And Hamsters.

So, let us get started on it.

Mass of some popular adult pet hamsters is as follows:

Hamsters have short and stubby tail. Adult Chinese hamsters and Chinese striped hamsters have tail that is approximately 2 – 3.6 cm (0.78 – 1.41 in) long.

Gerbils have longer, pointed snouts like that of rats whereas Hamsters have a relatively short nose/snout.

Gerbils have long hind legs which they love standing on. On the other hand, Hamsters have short and stocky legs, with wider feet.

In general when Gerbils are kept alone, they have a shorter lifespan. So, clean environment, adequate food, exercise and company of other gerbils are essential for them to live happier and longer.

More than 110 species of gerbils live throughout the African, Indian and Asian deserts. However, only Fat tailed, Mongolian and Pale gerbils are more popular as pets.

Due to selective breeding, the Mongolian breed has several varieties including the Golden agouti, Black, Burmese, Light red fox and Schimmel.

Fat-tailed gerbil’s coat colors can vary from apricot, to grey, through to a buff brown or even speckled yellow and gray.

Hamsters come in more varieties of patterns and colors then gerbils do.

Gerbils are generally more curious, energetic and fun whereas Hamsters are usually laid back but they both love running the wheel.

Gerbils very rarely bite. They are friendly, curious and love being held, making them great pets for children.

Hamsters, on the other hand, tend to bite more often, even if you had them for a long time.

Gerbils are diurnal but in captivity can be active during day or night. They take naps whenever they feel like taking one.

Hamsters are nocturnal, usually sleep during day and are active during evenings and nights. This means they are likely to keep you awake at night, especially if your hamster is situated in your bedroom.

Since Gerbils are desert animals, they produce very little waste. In turn, the housing areas do not stink as much and stays cleaner longer.

Hamsters on the other hand, can be stinky and their tanks have to be cleaned very frequently.

Gerbils eat sunflower seeds, seeds of various grasses, bulbs, range of leaves, herbs, small quantity of fruits (pear, melon, apple, oranges) and vegetables (cucumber, carrot, pumpkin, fennel). Be careful not to give them grapes or rhubarb as these are poisonous to rodents.

Hamsters can be fed a wide variety of fruit and vegetables. Give them a small piece of fruit or vegetable daily. Don’t give them citrus fruits or onions as these foods are very acidic and give them upset stomach.

Both hamsters and gerbils are omnivores and love mealworms and crickets every now and then.

Gerbils do not show food hoarding behavior as they do not have cheek pouches to store and transport food.

On the contrary, Hamsters show food hoarding behavior as they are equipped with cheek pouches to store and transport food.

Gerbils are more social so can be housed together. Adult Gerbils get in the fight with newcomers so split cage method has to be implemented until they get accustomed to each other.

Since they are more social, it is best to keep a pair in order to prevent sadness and loneliness. If they don’t have friends in their cage, they will die.

It is good to keep two male Gerbils if you don’t want babies. The females in both species are more aggressive to each other.

Hamsters are more solitary and territorial, get into fights more often and can hurt each other.

Having said that, some dwarf hamsters like Campbell dwarf and Chinese dwarf can be kept in groups as they are less likely to fight. They usually are solitary so don’t really need a pair when kept as pets.

For Gerbils, approximately 65 to 75°F with a low humidity of about 30 to 50% is appropriate. If temperature goes below this limit both these species can go into hibernation, which could be very deadly.

Approximately 65-75 degrees Fahrenheit is also ideal for Hamsters. For both species, housing should be located away from strong heat sources such as direct sunlight, wood stoves, or fireplaces. Cage should be well ventilated for both the species as well.

Gerbil’s gestation period on an average is 25 days.

If the female is bred while nursing earlier litter, the gestation period can be longer than 25 days, up to 42 days.

It is a good idea not to remove daddy gerbil in gestation period since his presence can be very comforting to the mother.

With the Hamsters, gestation period varies. On an average, gestation lasts 16 to 18 days for Syrian hamsters, 18 to 21 days for Russian Dwarf hamsters, 21 to 23 days for Chinese hamsters and 23 to 30 for Roborovski hamsters.

You can expect between four and six little gerbils (pups) in a single litter. Constant reproduction (a litter every month) is how gerbils form colonies in the wild, but that’s probably not something you want going on in your house.

The average litter size for Syrian hamsters is about 7 pups, but can be as great as 24. Campbell’s dwarf hamsters tend to have 4 to 8 pups in a litter, but can have up to 13. Djungarian, Chinese & Roborovski tend to have slightly smaller litters.

So there we go, those are the differences.

The differences between a hamster and a gerbil are ample however, they both can be great pets if you are a responsible pet owner.

Here is an infographic summarizing the differences:

Note: Click on the image to view the complete Infographic. 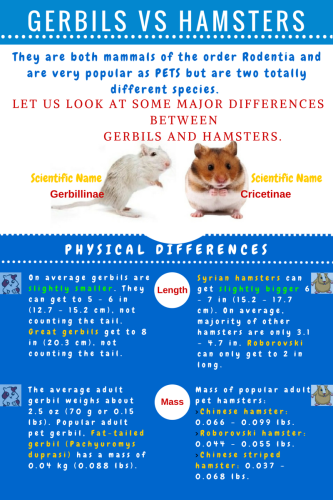 Are there any other differences that you know of? Share your thoughts and insights in the comment below.

Also don’t forget to share this article in your favorite social media outlets: