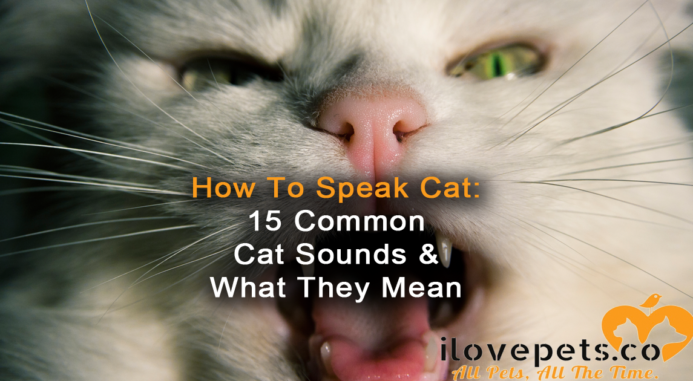 Do you speak cat? Or are you mystified by the many voices of our feline friends?

While dogs only make about 15 vocalizations, a cat is capable of up to 100 unique sounds.

Here are just 15 of the many ways cats use their voices to communicate with humans and other animals:

Are you 90 seconds late with your cat’s breakfast? Unacceptable.

Your cat will let you know it’s time for a meal with a loud, attention-grabbing meOW. You’ll often notice a punched-up second syllable, an extra bit of emphasis to let you know that your cat is not kidding around. Cats take mealtime very seriously, and those demanding meOWs are their way of keeping you on track.

If your cat is satisfied with your offerings, they might just say “nom-nom-nom” as they eat. This is actually not a sound of satisfaction. It might be a possessive growl, altered by the action of munching. A nomming cat might feel insecure about their food, scarfing it down quickly because they are worried that it will be taken away. As cute as it is, it’s a sign that your cat needs some space. If you have multiple cats, they may need to eat in separate rooms.

While dogs are better-known for their greeting skills, some cats are just as enthusiastic to see their owners come home from work or school. If you routinely feed your cat the moment you get home, this greeting might just be a hunger meow. It’s easier to tell if it’s genuine if you do not come home at mealtimes, or if you’re not the person who typically feeds the cat. A welcoming meow comes with a tail curved at the tip like a question mark. The welcome meow is soft, sweet, and it typically stops once you reach down to give your kitty some much-needed love.

Scratching a cat in that perfect spot brings on weird noises. When a purr simply isn’t enough, your cat may try to meow with appreciation, and their voice may be altered by the vibration of their vocal cords. You may also notice an outstretched tail as your cat leans into the scratch – if they didn’t enjoy it, their ears would flatten and they would move away.

Your cat will let out a short meep when they want to bring something to your attention. This might be a toy that they’ve batted under the couch, or they may be asking you to remove an object from your lap or their favorite napping spot so they can lay down.

Many cats, but not all, purr when they experience something comforting, like gentle scratches around their head and shoulders. Cats also purr when they give birth, and when they’re scared or in pain. Purring might be more than a way for cats to communicate bliss – it may actually be a self-healing mechanism.

It’s in the vibration. A cat purrs at a frequency of 20 to 140 Hertz (Hz)… while exposure to frequencies at that same 20 to 50 Hz induces increased bone density, relieves pain and heals tendons and muscles.

When a cat is scared or annoyed, they’ll use many indicators to tell the offender to “back off”. A low, rumbling growl may be combined with hissing, spitting, flattened ears and a swishing tail. Cats use these signs to communicate with humans, dogs, and other cats, so it’s likely that their opponent will understand at least one of their warnings.

Cats show off their pointy, intimidating incisors as they hiss. It’s possible that cats learned to hiss from snakes.

It sounds funny when a cat makes a whiny “no-no” sound, but it’s another clear sign of fear. It’s less often associated with aggression. If their opponent fails to notice a hiss or growl, they’ll likely hear this strange sound and back off.

If your cat makes fearful noises, it’s best to remove whatever is frightening them, then use counter-conditioning to change the way they feel about it. When introducing a new cat into your home, or teaching a timid cat to accept affection, you’ll need to work gradually with plenty of positive reinforcement (usually food) to slowly acclimate them to something they find scary. Never punish a cat for letting you know they are afraid by hissing, growling or no-no-ing.

When a female cat is in heat and ready to mate, she’ll let every male cat in the neighborhood know by emitting a low, drawn-out meow. If your cat’s in heat, you’ll also notice her laying low to the ground in the mating position, as though she’s waiting to be mounted, her tail curled to one side. This annoying behavior will only stop once you get your female cat fixed.

Cats scream when they’re fighting with other cats. Female cats scream during mating – a male has a barbed member, so, though she’ll caterwaul to initiate the mating, she’ll scream when it actually happens. While cats can cause serious, even fatal injuries when they fight, loud screaming can make a mild fight seem very dramatic.

When your cat isn’t in immediate peril but wants to communicate their mild discomfort or inconvenience, they may cry or yowl.

While bird-watching out of a window, your cat may make a chirping or chattering noise. It almost seems like they’re imitating or trying to attract their prey, but a hunting cat will usually be completely silent. Cats chatter when they can’t reach prey, possibly out of frustration.

Cats don’t meow at each other as adults, but they do meow to their mother while they are kittens. Nursing kittens typically meow when their mother leaves the litter to eat or drink water. Most prey animals, like rabbits and deer, evolved to be silent when their mothers are not present to keep them from drawing attention from predators. Cats, however, are predators, so kittens can be a little noisy without putting themselves at risk for being eaten. The kitten meow may help the mother cat locate her kittens when she returns.

Many cat owners start their morning with a polite, yet persistent purr. Cats have evolved to create the noises we’re most likely to respond positively to; some will avoid a demanding meow if a purr is more likely to get them the food or attention they want. Experts suspect cats take advantage of our instinct to nurture a crying baby by making very similar sounds that we can’t help but respond to. If your cat is your baby, this probably comes as no surprise!

Does your cat talk to you? What do they say?