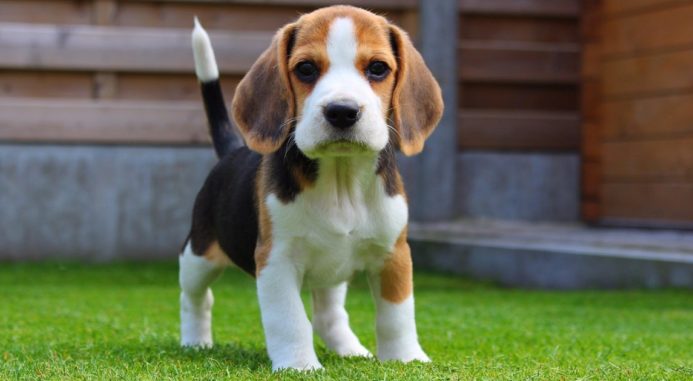 The Beagle is one of the smallest dogs of the hounds group. It is believed the origins of the breed are in ancient Greece. The nomads that used the breed to hunt hares brought them to England. At that point of its history, the breed was smaller and easy to carry in the hunting bags.

During the years of evolution, the breed didn’t lose its hunting abilities. The breed was originally developed and used as tracking dogs; used in packs for small game.

This breed is as happy on the couch as it would be in the forest running after foxes. The Beagles are lively and loyal pets. Due to this reason, this breeds of dogs has been increasingly popular among pet owners.

Besides the obvious uses, the breed is also used in animal testing in laboratories.

One of the most distinctive features of the breed is the barking; and you will get a lot of that harmonious sounds like bark as a Beagle owner. Sometimes they also howl and squeak.

The dogs belonging to this breed are well built, with strong bodies ended with a long thin tail. The ears are long and floppy slightly pushed forward.

The coat is short, thick and waterproof. Its coat palette is specific to the hounds, although the tricolor brown-black-white is the most popular.

They are similar in appearance with the Harrier; this is reason why these two breeds were used to create the Beagle-Harrier mix breed.

The Beagle is an active and happy dog. Although they are pack dogs, the Beagle is a great pet when housed alone.

Around other animals its behavior is always unexpected. Even if they aren’t aggressive, their outgoing personality might not be well perceived by the other animals.

They enjoy the company of the children; goofing around for their enjoyment.

The Beagle needs constant exercise, so if you decide to buy a Beagle either you have a big yard or an active lifestyle. Before you bring your dog home, the house has to be dog proofed, because this breed will literally chew on anything.

They don’t require daily grooming, but once in a while it is advised to brush their coat especially if they are living in an apartment, the dog hair will be visibly piling up during a week.

These dogs breeds are predisposed to obesity. The main reasons for obesity are: insufficient exercise or an unbalanced nutrition. These dogs tend to overeat, so if an increase in daily exercise isn’t possible other methods should be approached. For example you could mix high fiber foods in the daily meal, this way you can trim the weight without starving him. Beagles that don’t have their hunger satisfied are unhappy and on constant search for food.

When walking them I would advise using a leash, never leaving them to roam free; once they have found a smell the can track it for miles. As they start tracking they become deaf to your recall orders.

The curious nature of the Beagle will prevent you to have the dog and a garden in the same place; as it will track the scent of a ground dweller and start digging in any direction. If you decide to plant something on the Beagle territory, consult a veterinarian regarding the poisonous plants.

The cherry eye appears as a red bubble at the inner angle of the eye, that bubble is the accessory gland of the third eyelid. It is surgically re-positioned and the outcome is great without further complications.

Beagles are returning customers to the emergency room; as they eat and chew on anything including: bees, poisonous plants, bones, rocks and so on.

Most of the bad traits can be fixed with adequate training, but training can prove to be very difficult.

The Beagles are intelligent dogs; unfortunately they tend to get distracted easy. When training them they will prove to be stubborn if you use force to make them execute a command; reward based training should be used instead.

Without a proper early training, the Beagle grows up in to a stubborn, dominating dog.