When I was a kid growing up in Nepal, I was always scared of dogs.

With a lot of stray dogs everywhere (and I do mean literally everywhere), it was impossible not to be scared.

The situation with stray dogs was really bad back then and probably still is. I don’t know what the situation is like right now because I haven’t been in Nepal for more than a decade.

The older folks used to tell me not to act scared – ‘act calm or unafraid because if dog smells fear in you, it will bite you’.

I was 8 or 9 years old and I sure did my best to keep my cool when confronted by stray dogs; but believe me I was scared every single time.

Due to that incident in my past, I had always thought that animals can smell the fear in us humans.

Here recently though I came to find out, scientifically, it hasn’t been proven that dogs or any other animals can literally smell fear.

We can’t deny the fact that some animals (like dogs) do have part of their brain, used for figuring out the smell, much larger than that of the humans. 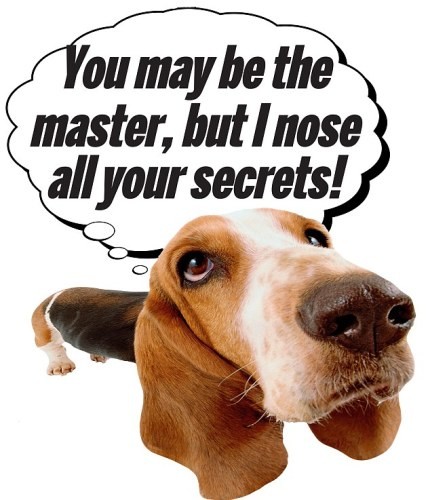 And yes; due to adrenaline, hormones and bodily chemicals we do smell when we sweat. Dogs or other animals might be able to smell the odor of the sweats we produce.

However, scientifically there is no proof that the emotional states including fear do produce any airborne molecules that is detectable by the nose or other sensory organs.

Majority of the animals we know do emit pheromones. Pheromones are the chemicals that transmit all kinds of information including the info about location of food, mating interest, danger etc.

There is an organ called the vomeronasal organ (Jacobson’s organ), located above the soft palate of the mouth and the floor of the nasal cavity. This system is designed to read the chemical pheromones.

Pheromones are how hundreds and thousands of insects like the bees and the ants are able to be in sync (if only they are from the same group/hive/nest.) To be in sync is essential part of how they conduct their complex colony activities.

If you really think about it, in the evolutionary point of view, it would be devastating for a prey species if the predator species can smell fear. This would make the chances of the prey animal escaping from the predator highly unlikely.

Now on the other hand, animals like dogs have a great ability to read the body language by utilizing the visual cues and auditory stimuli.

‘Fear is not something like the smell of food where the airborne molecules are easily detected by the smell organs’, scientists say. So, it is in fact our visual cues that give out a great deal about our feelings and emotions including anger, fear and nervousness.

Fear might be more visible because of the body language. The sense of fear may depend largely on behavioral cues – auditory and visual stimuli.

The animal’s aggression towards a fearful individual may be a little bit of both – the combination of smell and body language. We don’t know just how much smell is involved till some more advanced researches are done in this subject. But we are definitely not in the wrong, when we say one major factor is the body language.