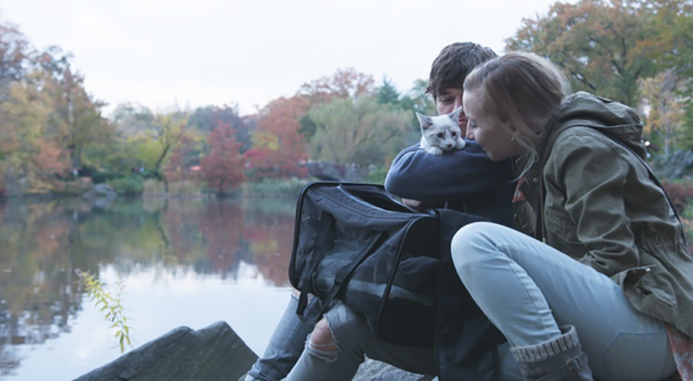 Each one of us knows what it’s like for an animal to touch our lives.

If we’re lucky, we get to enjoy our animal companions for decades, but Aeris the white Bengal kitten was only with Paul Castro Jr. and Aly Miller for twelve days before she passed away from Feline Infectious Peritonitis (FIP).

In those 12 short days, she made a powerful impact on her owners, forever changing the way they view love, responsibility, life and death.

The young New York couple knew they had to help Aeris live on. By writing, directing and starring in their own upcoming short film, they’re hoping to inspire those who have also been affected by FIP or cared for a sick pet, and anyone who has ever loved an animal. Other cast members include Frank Deal from Netflix original series Gypsy, Betsy Aidem from Broadway’s All The Way and Arabella Oz from Where The Starlight Ends.

I had a chance to interview Aly and Paul just 13 days before the end of their KickStarter to learn more about Aeris and her battle with FIP, and how they hope to inspire others and make a difference with their film.

What Is Feline Infectious Peritonitis (FIP)?

Feline Infectious Peritonitis (FIP) is described by PetMD as a viral disease in cats which carries a high mortality due to its characteristic aggressiveness and nonresponsiveness to fever, along with other complications.

Aly shared what she had learned about the disease. “All kittens, even puppies, are subject to the coronavirus. It’s basically a simple cold that most animals are able to fight off. In cats, there’s a small percentage – less than 5% – that are not able to fight off this virus. It manifests and turns into FIP.”

The mutation of the coronavirus develops into FIP, and that eventually causes one of two types of FIP: wet and dry. Wet causes the belly to fill up with fluid, and eventually the organs shut down. It’s a very painful and often fast death for the cat. It’s horrible to watch them go from being relatively healthy and then very shortly being sick and then dying from the disease,” Paul added.

“Aeris, when we got her, had already been fighting off FIP. She was sold to us very sick… she was on the tail end of her fight.

I knew that she was fighting, and it looked like she was sick, and I could tell that there was something off, but I had no idea what FIP even was, I thought, you know, she probably just had a huge belly from having worms, and that she’s a kitten and that’s pretty common. Being inexperienced with cats, I just kind of wrote it off – oh, you know, she’ll be fine.”

The pet store employee said the tiny kitten’s distended belly was a side effect of a recent deworming. Aly and Paul were hopeful that she would become healthy after some love and care in their home.

Soon after Aly and Paul brought her home, it became clear that Aeris was truly sick.

“I just thought she was a runt, being a little goofy in terms of how she walked. Her belly was so distended that it looked like she was waddling like a duck. She was very lethargic… she wasn’t running around like a kitten normally does… Her eyes looked like she was in pain,” Paul recounted.

“We never saw her drink water. We think it was too painful for her. We saw her eat here and there, but she didn’t really have much of an appetite at all,” said Aly, “and she pretty much always peed and pooped in the bed, she was expressing how horrible she felt by doing that.”

They brought her to a veterinarian, who diagnosed Aeris with FIP. It was the first they had heard of the disease, and they were shocked to learn that there was no treatment or cure. Faced with the choice to have her immediately euthanized or try their best to help her, they didn’t see euthanasia as an option.

“This is the first time I had been an animal owner myself. I’ve had animals growing, and so has Aly, but when you become a parent, in terms of an animal or even a child, there’s a lot of similarities that come along. You are that animal’s only resource of communication… we were responsible for her, we were the only people looking out for her. We just grew immediately to having this bond with this cat who was in pain, and it was so much more than just an animal. This was our baby, and we needed to try and help her.”

“It was strange to have this kitten that you’ve fallen in love with, and to bring it to the vet for an exam and for them to say, ‘It’s FIP, it’s incurable, she’s going to die, there’s no treatment, you’re going to have to put her down.’ There’s this weird narrative, “that can’t be true, that can’t be right. There’s gotta be something we can do. Maybe we could give her a raw diet, maybe we could give her some vitamins… we’re going to fight this.”

Despite her symptoms getting worse, she was getting happier being around us.

“We got a heating pad for her and we set up our bed with cushions all around, like a ramp. I did a lot of research, I read about how feeding cats a raw meat diet really is the best thing for them. We did get to try it a little bit, but she ran out of time. If I could go back in time, I would have tried to find a holistic vet. Our vets were giving her antibiotics, but we later read that it’s actually harmful to give a kitten with FIP antibiotics, it actually weakens their system.”

The couple scoured the web for holistic treatments, alternative cures – any glimmer of hope that could make their kitten well. While there were a few treatments that seemed successful in clinical trials, there’s no treatment currently available to the public, despite the fact that many cats are affected by FIP each year. Aly and Paul anticipate more treatment options becoming available in the future, and hope to help the cause by raising awareness of the disease with their film. 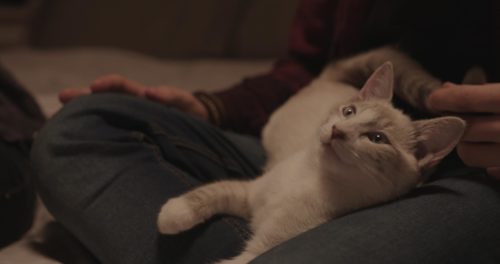 Aeris is a love story between a young couple and their sick kitten – and an inspirational film to which anyone who has cared for an ailing pet can relate. The big takeaway: never lose hope and appreciate your pets, because you never know how little time you will have to spend with them.

If you’re looking to add a new feline friend to your household, there’s no guarantee that the cat will not have FIP, or will not be one of the small percentages that can contract it. However, there are a few ways you can lessen your chance of having your heart broken by this aggressive illness:

How You Can Get Involved

Aeris is currently being funded on KickStarter to pay the cast and crew, cover filming and production expenses and festival submission fees.

When you pledge $25 or more, you’ll get a private link to view the film when it’s completed, and a digital copy after the film’s festival run.

Check out Aeris on KickStarter and make a pledge so you’ll be one of the first to view the short film!

The film is fiscally sponsored by Heaven On Earth Society For Animals Rescue Organization, meaning all pledges are 100% tax deductible. All proceeds from the film will be donated to the organization.

Share with the animal lovers in your life to make sure they don’t miss Aeris!